The most imposing monument at Tiwanaku is the temple of Akapana. It is a pyramid originally with seven superimposed platforms with stone retaining walls rising to a height of over 18m. Only the lowest of these and part of one of the intermediate walls survive intact. Investigations have shown that it was originally clad in blue stone and surmounted by a temple, as was customary in Mesoamerican pyramids. It is surrounded by very well-preserved drainage canals. The walls of the small semi-subterranean temple (Templete) are made up of 48 pillars in red sandstone. There are many carved stone heads set into the walls, doubtless symbolizing an earlier practice of exposing the severed heads of defeated enemies in the temple.
http://whc.unesco.org/ 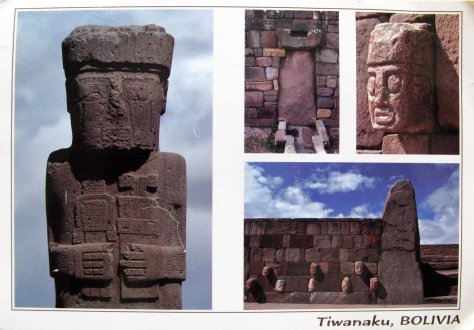 From  La Paz, Bolivia
Travel from Mar 8 to Apirl 3
Thanks Nunez !

No.39 ( My Unesco World Heritage Site)

Isla de la Luna (Moon Island)
Koati or Isla de la Luna is located about 7 Kms. to the southeast of Isla del Sol, facing the ancient stone town of Sampaya. This was also a sacred island for the Incans and their predecessors and it houses a fascinating ruins complex. This small island is home to just six families but hosts an amazing view of the Cordillera Real. Iñak Uyu Palace (Or Moon Temple) is said to have been an “Ajllawasi” or “House of the Virgins of the Sun” and consists of three main wings encircled by a patio with finely carved facades.
http://www.bolivia-online.net/ 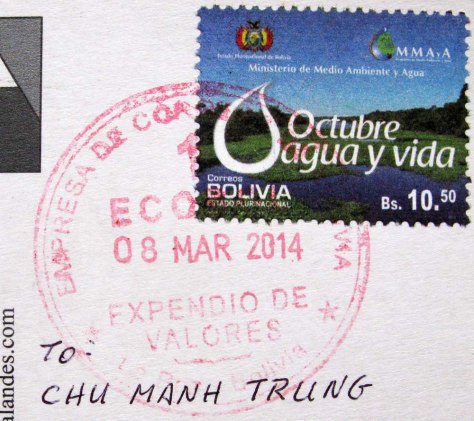 On November 30, 1538, Sucre was founded under the name Ciudad de la Plata de la Nueva Toledo ( Silver’s City of New Toledo) by Pedro Anzures, Marqués de Campo Redondo. In 1559, the Spanish King Philip II established the Audiencia de Charcas in La Plata with authority over an area which covers what is now Paraguay, southeastern Peru, Northern Chile and Argentina, and much of Bolivia. The Audiencia de Charcas was a subdivision of the Viceroyalty of Peru until 1776, when it was transferred to the newly created Viceroyalty of the Río de la Plata. In 1601, the Recoleta Monastery was founded by the Franciscans and in 1609, an archbishopric was founded in the city. In 1624, St Francis Xavier University of Chuquisaca was founded.
From Wikipedia, the free encyclopedia.

Historic City of Sucre Sucre, the first capital of Bolivia, was founded by the Spanish in the first half of the 16th century. Its many well-preserved 16th-century religious buildings, such as San Lázaro, San Francisco and Santo Domingo, illustrate the blending of local architectural traditions with styles imported from Europe.

The Historic City of Sucre is authentic in terms of form and design, material and substance, as well as location and surroundings. Its buildings, architectural result of the symbiosis of local and imported styles, have been maintained and conserved in a homogenous and harmonious manner, in both form and surroundings, in harmony with the environment. http://whc.unesco.org/

No.36 ( My Unesco World Heritage Site)

Billed as ‘the best museum in Bolivia’ by one of the guidebooks, Casa Real de la Moneda had a big reputation to live up to. With only one full day in Potosi I came straight off my mine tour and hit the museum – which may possibly have affected my enjoyment of it somewhat as I was slightly underwhelmed. The building itself is incredible – it’s almost hard to believe it’s as old as they say as, apart from the 500 year old style, it looks almost new. So it was the monotone tour guide that lost me I think – he sounded like a bored Stephen Hawkin and managed to make some absolutely fascinating tales torture to listen to. I was also a bit miffed to find out that it was an extra 20 Bolivianos to take photos inside the museum (basically doubling the entrance fee) – not possessing a decent camera I didn’t bother… so all coin shots are sourced off the internet!
http://lukeawaynow.com/ 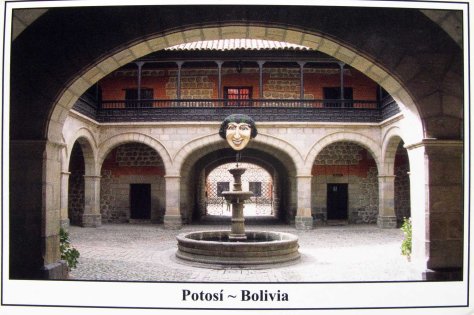 The giant face which greats you at the mint

Potosí is a city and the capital of the department of Potosí in Bolivia. It is one of the highest cities in the world by elevation at a nominal 4,090 metres (13,420 ft) and it was the location of the Spanish colonial mint. 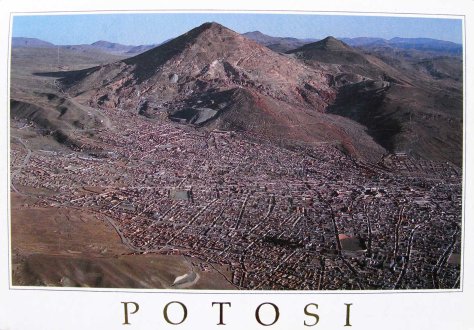 Potosí lies at the foot of the Cerro de Potosí—sometimes referred to as the Cerro Rico (“rich mountain”)—a mountain popularly conceived of as being “made of” silver ore, which has always dominated the city. The Cerro Rico is the reason for Potosí’s historical importance, since it was the major supply of silver for Spain during the period of the New World Spanish Empire.
From Wikipedia, the free encyclopedia. 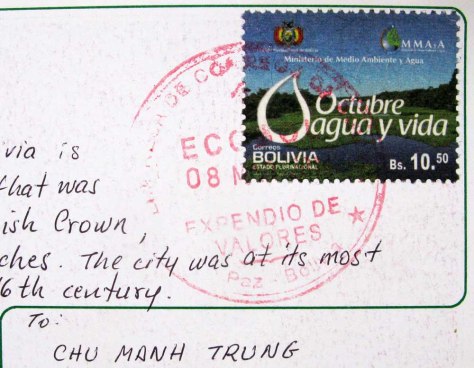 No.35 ( My Unesco World Heritage Site)

The Folklore in Bolivia.
Bolivia is one of the richest countries in traditions, rites, costumes, dances and customs maintained since the colonial days until our days.
The traditions of the former populations mingled with the traditions of the Spanish colonizers to achieve the half-breed customs and traditions that since then they are kept by a part of the population and they are revived in the folkloric feasts of the country

In every dance characters of the Colonial times and mystical beings like the devil of the excavations (Supay) and the angels are represented.
The festivities present hundreds of dancers in a spree of colors and merriment in a strange mingles of paganism and Catholicism.
Another aspect of the Bolivian Folklore is its peculiar native musical instruments. At the rhythm of their melodies the dancers sing and dance offering delight to the local dwellers and the foreign.
http://www.boliviacontact.com/

Spiritual and Political Centre of the Tiwanaku Culture

The city of Tiwanaku, capital of a powerful pre-Hispanic empire that dominated a large area of the southern Andes and beyond, reached its apogee between 500 and 900 AD. Its monumental remains testify to the cultural and political significance of this civilisation, which is distinct from any of the other pre-Hispanic empires of the Americas.
http://whc.unesco.org

No.31 ( My Unesco World Heritage Site)