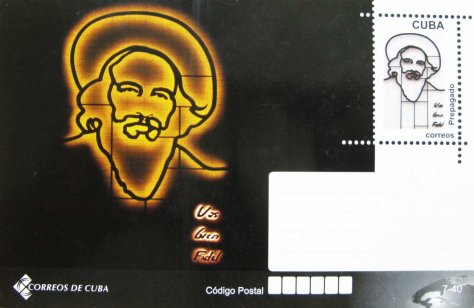 Camilo Cienfuegos Gorriarán ; February 6, 1932 – October 28, 1959) was a Cuban revolutionary born in Lawton, Havana. Raised in an anarchist family that had left Spain before the Spanish Civil War, he became a key figure of the Cuban Revolution, along with Fidel Castro, Che Guevara, Juan Almeida Bosque, and Raúl Castro.
In October 2009, in honor of the 50th anniversary of his death, a 100 ton steel outline of Camilo’s face was added to the side of the Ministry of Informatics and Communications building at the Plaza de la Revolución. Accompanying the stencil facade are the words “Vas bien, Fidel” (You’re doing fine, Fidel), representing the famous response of Camilo to Fidel at the January 8, 1959 rally where Castro declared that the Columbia military barracks would be made into a school, and then asked Camilo, “Am I doing all right, Camilo?”
From Wikipedia, the free encyclopedia

From CuBa
Travel from Sept 9 to Nov 14
Thanks Alci !